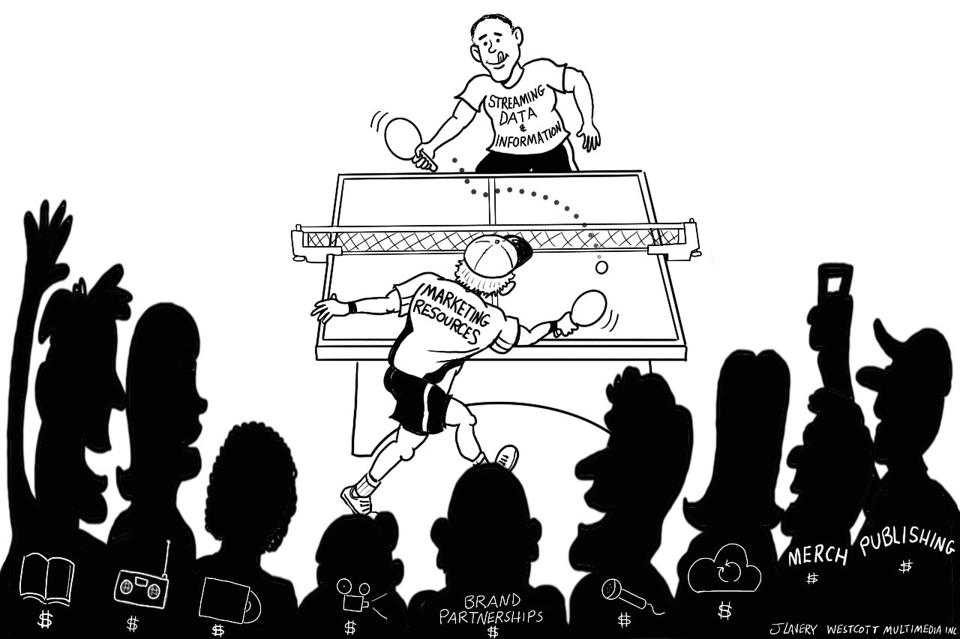 Dynamic marketing is like a ping-pong game between digital advertising spend and streaming. Depending on where and when streaming spikes the ball, that is when you spend.

Traditionally, a label sets its marketing budget in advance of its yearly releases. The bulk of that budget is allocated to current releases, priority records. Once the budget is set, in most cases, the funds are not re-allocated to other artists. This is known as a static marketing strategy. As a result, there are missed opportunities to further grow the catalog repertoire; that is, the collection of older songs that were released more than a year and a half previous.

Once you release a song onto the internet the song can see a spike in streaming with or without a record label’s marketing efforts. Events that can cause an organic spike in streaming include the release of a movie soundtrack, artist documentaries, tour announcements, celebrity tweets, viral videos on YouTube, Twitch, Snapchat and more. This spike in streaming represents a moment of increased awareness about the artist or band. It is possible to utilize these moments of increased awareness to identify new fans and retain old fans by marketing any ancillary revenue stream related to the artist at that moment such as concert tickets, merchandise, box sets, streams and more. Let us look at a few examples that have occurred over the past three years, to illustrate the point.

On November 2, 2018, the movie Bohemian Rhapsody was released in theatres in the United States. According to Buzz Angle Music, Queen saw an increase in streams from 33 Million the week prior to 86 Million in the U.S., the week of the film release. Per week streams in the U.S. stayed above 50 million per week for the next six months.

On February 13, 2017, Metallica announced their WorldWired Tour. On average, the band was seeing 13 million U.S. streams per week. In the week of the tour announcement, streams increased by 3 million, physical and digital album sales combined went up by 10,000 and vinyl records sales rose by approximately 300,000 in the U.S. Spotify’s “This is: Metallica” playlist was also put into Browse in the U.S., which influenced an additional surge in streams and further drove online performance.

On May 5, 2017, the highly anticipated sequel “Guardians of the Galaxy Vol. 2” was made available in movie theatres in North America. The soundtrack entitled “Guardians of the Galaxy: Awesome Mix Vol.2” was released on April 21. George Harrison, the lead guitarist for The Beatles, his song, “My Sweet Lord,” is the seventh song featured on the soundtrack.  The week the soundtrack was released, George Harrison’s entire catalog of music saw an uplift of 240,000 U.S. streams. The same week the movie debuted, that number increased by 1.5 million.

The phenomenal response to Guardians of the Galaxy went beyond the direct impact that it had on the streaming numbers of legendary musicians and their extensive catalog of music. The film helped exposed and popularize classic rock to generation X and generation Z.

As we move into 2020, record label catalogs are only going to grow. Creating a separate pool of marketing budget to spend on releases on an ad-hoc basis facilitates hedging of bets across an entire catalog instead of relying solely on current and priority releases.

Are you flushing marketing dollars down the toilet? The biggest mistake in small business marketing is forgetting the phrase “lifetime value of a client.” Understanding this strategy can leave your cheaper competition in the dust. Most small business owners see ad and marketing spends as a make it or break it the first time proposition. […]

Consumer brands have more opportunities than ever to engage potential buyers. From tablets to smart watches to home AI assistants, the average household now has six devices connected to the internet. And nearly all Americans — 98 percent — use multiple devices a day. But how do companies make sure they’re sending the right message, to the […]

It’s a well-known fact that Bajaj Auto Ltd has beaten competitors hands down in FY19. While the company reported growth of 28.7% in the domestic two-wheeler market in FY19, all other competitors put together grew volumes by just 2.3%. As this column has pointed out, Bajaj Auto’s aggressive pricing strategy in the entry-level commuter category did […]

VIDEO: GMAC Hits Back At ‘MBA Is Dead’ Claims